Donald Judd remains one of the most significant artists of the twentieth century. His radical ideas and work continue to provoke and influence the fields of art, architecture, and design.

Donald Clarence Judd was born on June 3, 1928 in Excelsior Springs, Missouri. He served in the United States Army in Korea from June 1946 until November 1947. Upon his return to the United States, Judd studied philosophy and art history at Columbia Uni­versity and painting at the Art Stu­dents League. From 1959 to 1965, he worked as an art critic, often writing over a dozen reviews a month. Judd was a painter until the early 1960s, when he began making work in three dimensions which changed the idea of art. Throughout his lifetime Judd advo­cated for the importance of art and artistic expression. He wrote extensively on the importance of land preservation, empirical knowl­edge, and engaged citizenship.

Judd developed his ideas con­cerning the permanent installation of artwork first in New York, at 101 Spring Street, a five-story cast-iron building he purchased in 1968. Judd began to purchase properties in Marfa in 1973 where he would continue permanently installing his work and the work of others until his death in 1994. These spaces, including studios, living quarters, and ranches, re­flect the diversity of his life’s work. Judd established the ideas of Judd Foundation in 1977, founded to preserve his art, spaces, librar­ies, and archives as a standard for the installation of his work. He founded the Chinati Foundation/La Fundación Chinati in 1986 specifically for the permanent in­stallation of large-scale works by himself and his contemporaries.

For almost four decades, Judd exhibited throughout the United States, Europe, and Asia with his work in museum collections worldwide. Major exhibitions of his work include the Whitney Museum of American Art, New York (1968, 1988); the National Gallery of Canada, Ottawa (1975); Stedelijk Van Abbemuseum, Eindhoven (1970); Tate Modern, London (2004); and The Museum of Modern Art, New York (2020). 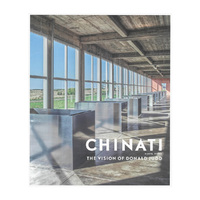 Chinati: The Vision of Donald Judd