Haroshi (b.1978, Tokyo) is an artist who since 2003, has engaged in creating sculpture and installation works through a unique and self-taught method of utilizing parts from used skateboard decks. He continues to receive much acclaim for his work, such as his collaboration with the street brand HUF led by Keith Hufnagel, as well as his receipt of the BATB trophy, and has held numerous exhibitions in locations including New York, Los Angeles, and London, gaining recognition as one of the few artists to embody the depths of contemporary street culture. In 2019 in the exhibition “Tokyo Pop Underground” (Jeffrey Deitch) which travelled to New York and Los Angeles, Haroshi presented a five-square meter masterpiece installation which attracted a great deal of attention. 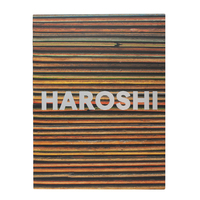