Born in a desert city called"404" in 1984 and spent 19 years. Located in the Gobi desert in Western China, this city is nowhere to be found on any map. 404 was built in the 1950s, when China initiated its first nuclear weapons testing.
Li graduated from China’s Southwest University of Science and Technology, majoring in Heating Ventilation and Air Conditioning (HAVC) in 2007. Between 2007 and 2013, he designed the HAVC system of the nuclear power station in the China Nuclear Power Engineering Co., Ltd. Since 2013 he has been working as a freelance photographer based in Beijing. His photographic series “404 NOT FOUND” won the Best Photography Award at the 7th Dali International Photography Exhibition. 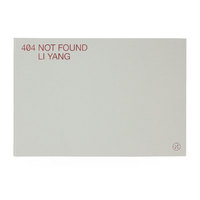