Shigeru Onishi (1928–94) was born into a long-established family in Takahashi, Okayama Prefecture. Already by middle school he was engrossed in the study of advanced mathematics while also experimenting with poetry. In 1953 Onishi graduated from Hokkaido University’s Department of Mathematics and remained at the university to research topology. In Hokkaido he began to take photographs, from the beginning seeking to express internal images rather than represent the external world. His first solo exhibition was at Nabis Gallery, Tokyo, in 1955; in the late 1950s he gradually shifted his interest from photography to abstract ink painting, which French critic Michel Tapié introduced to the European public in the 1960s and ’70s with the Gutai Group. Onishi’s work is held in collections including the Museum of Modern Art, New York, Bombas Gens Centre d’Art, València, the National Museum of Modern Art, Kyoto, and the National Museum of Art, Osaka. 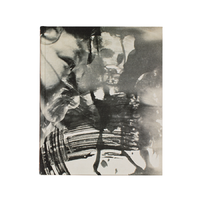