With the ongoing Corona pandemic having limited his ability to travel, the sight of airplanes in the sky took on different meanings for Japanese photographer Shohei Takenaka.

“Ever since we were stripped of our freedom to travel,
I couldn’t help feeling that airplanes were like flies,
maddeningly flying around the house.

Way back, I remember feeling excited just seeing an airplane whiz by.
My innocent son gets wide-eyed whenever
he sees one and waves saying, ‘Hey!’”
― from Shohei Takenaka’s foreword

Takenaka, who studied under Osamu Yokonami, began to photograph the few airplanes still crossing Tokyo’s skies using a half-frame camera. In his photobook “Air Bug”, each page presents two consecutive shots next to each other, lending the airplanes a little perceived motion. While the sight of airplanes was once cause for wonder and joy, Takenaka’s gray and spectacle-free photographs of these metallic bugs erratically flitting across the skies are rather expressions of his discomfort with the ongoing situation and his nostalgic yearning for different times. 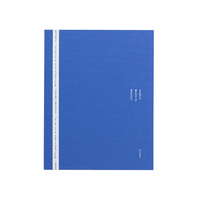 You can cut an onion without crying.