Artist Cheng Ting is adept at combining the subject of her portrayal with objects and environments; when she places people in her photography, they, like stage props, become part of her visual construct. In a similar way, the artist sees herself as always being on the fringe of the scene that is her life, observing it as a spectator whilst maintaining a certain distance from what she deems to be the main subject. This disengaged viewpoint allows her to present her observations in an entirely new appearance. It is similar to how an intersection that someone crosses daily looks entirely different when viewed from a space station. Extreme as this metaphor may be, it is true that the worldview that Ting constructs is always astonishing.

Since moving to London in 2010, Ting has been instilling in her creations the impact that a foreign language and culture has had on her. Nostalgia prompted her to bake homemade buns, which led to her making all sorts of buns*. Having always taken comfort in the rewards of handmaking, the artist was able to assuage her unease of being in a foreign place by baking. The kneading and baking of dough is her method of handling living abroad, a method which she extended to her interaction with people by braiding their hair. Thus, the Baker Salon series was born; by touching, arranging, and braiding other people’s hair, the artists creates temporary intimacy that has resulted in her hosting workshops related to Baker Salon. Consistent with her ideal and style of creating, Ting sees people as being halfway between a stage prop and a collaborator. Her interaction with the photographed subject is part of her creation, and the uncertainty that fills the process of creating is a key element to preserving the vitality and organic growth of her work.

The series was published in a small board book format, similar to a book for preschool children or even babies. This format was chosen not only in the hopes that its appearance would pull the readers closer to the work, but also that readers might recall their experiences of reading as a child, which tilted towards a simpler act of flipping through images. Furthermore, this project emphasizes the concepts of labor and interaction. The artist even shares her recipes for buns and looks forward to people making and developing new “bun” after reading the book. (Publisher)

*In the translation, the term “bun” encompasses steamed buns, steamed stuffed buns, and other round breads, even the “bunhead” hairstyle in which hair is arranged into the shape of a bun. 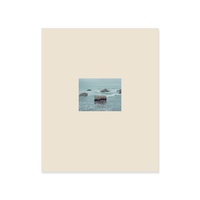