“On March 11, 2011, came the Great East Japan earthquake and tsunami. The old houses of my hometown, Miyagi, were also destroyed in the earthquake. Seeing the terrible scenery of my birthplace Miyagi on the TV news, I felt there was nothing I could do. But I was overcome with the feeling that I must go and photograph the trees standing in the place known as the ‘Field of a Thousand Pines’ on the Rikuzentakata shoreline.”
— from Toru Komatsu’s foreword

“Nature Morte - Après 311”, published on the tenth anniversary of the Great East Japan Earthquake and Tsunami, consists of photographs taken by Komatsu during his many trips to the Pacific Coast of Japan’s Tohoku region. He travelled together with his son Shizuka, a third-grader when the trips started. During the trips, they slept in their car, traveled around the affected areas, visited his parents’ house. His solemn black-and-white photographs depict the few defiant trees that continue to remain in the emptiness of the post-tsunami landscape. With restraint and composure, Komatsu’s images quietly relay the devastation caused on March 11 without disregarding the strange, haunting beauty of these sparse sceneries.

“My father, pictured here with Shizuka, is no longer with us. My mother, who praised me for this photo, is also gone. Ten years may seem like a long time, but for me, those days seem like yesterday.”
— from the artist’s statement 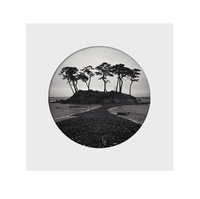