"‘This luminescent moon / waxes and wanes / as if to bemoan / the futility of life’
In this elegy from the ancient Japanese poetry anthology Manyoshu, the poet laments the inconstancy of the world whilst gazing at the waxing and waning moon.
I came across this verse by chance, just as I finished compiling the East Japan segment of "Hanamachi" which I had worked on since 2012. "
— Excerpt from the afterword

PHASE OF THE MOON is a continuation of Hiraga’s "Hanamachi" (2009, Sokyusha), in which he directs his gaze at downtown areas turned dark, then bright again after the earthquake and tsunami of March 11th, 2011. 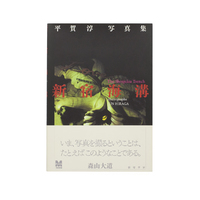