“Redheaded Peckerwood, which unerringly walks the fine line between fiction and nonfiction, is a disturbingly beautiful narrative about unfathomable violence and its place on the land”
Luc Sante

Redheaded Peckerwood is a work with a tragic underlying narrative – the story of 19 year old Charles Starkweather and 14 year old Caril Ann Fugate who murdered ten people, including Fugate’s family, during a three day killing spree across Nebraska to the point of their capture in Douglas, Wyoming. The images record places and things central to the story, depict ideas inspired by it, and capture other moments and discoveries along the way.

From a technical perspective, the photographs incorporate and reference the techniques of photojournalism, forensic photography, image appropriation, reenactment and documentary landscape photography. On a conceptual level, they deal with a charged landscape and play with a photographic representation and truth as the work deconstructs a pre-existing narrative.

Redheaded Peckerwood also utilizes and plays with a pre-existing archive of material, deliberately mixing fact and fiction, past and present, myth and reality as it presents, expands and re-presents the various facts and theories surrounding this story.

While photographs are the heart of this work, they are the complemented and informed by documents and objects that belonged to the killers and their victims – including a map, poem, confession letter, stuffed animal, hood ornament and various other items, in several cases, these materials are discoveries first made by the artist and presented here for the first time.

In book form, the work is presented as a sort of visual crime dossier, including pieces of paper which are inserted into the book. The many individual pieces included serve as cues and clues within the visual puzzle. In this way, there are connections that are left for the viewer to be made and mysteries that are left to be solved.

Redheaded Peckerwood is Christian Patterson's second monograph. His first book, Sound Affects, was published by Edition Kaune, Sudendorf in 2008. His work is in several notable collections including the Libraries of the Museum of Modern Art and the Whitney Museum of American Art, and the New Orleans Museum of Art and the Ogden Museum of Southern Art. 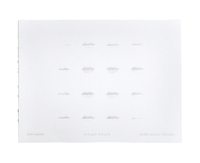