“Snowflakes Dog Man” by Japanese artist Hajime Kimura is a pensive, at times melancholic photobook about the artist’s father’s death, about memories, and uncertainty.

Physically separated into three parts (a smaller book, a bigger book, and a booklet), the strong, contrasty black-and-white photos deal thematically with the time when Kimura’s father was still alive; they depict places he visited following his father’s death; and they capture the belongings found when clearing out his late father’s room.

“Time passed, and I had become calmer. One day, I took a walk with the dog that once belonged to my father. By chance I met people who didn’t know yet that my father had passed away.
‘How’s the old man doing who walks the dog all the time?’
‘You’re Kimura’s son, aren’t you?’
During my walk, all of a sudden people approached me who had known my father and his dog when they took walks together. This was the path they always took. I didn’t know this; the dog did. I just followed it. When I realized this, I felt strange, as if he was still alive even though I knew he wasn’t. I wanted to know more about him, about his relationship with the dog, the places he had been to and the traces he had left behind. I started to take photographs, little by little, especially of my memories of him, to see if I could interact in some way with a man who was already gone.” (from the artist’s statement)

The book was originally released as a handmade artist book limited to 69 copies in 2015. All texts included in Japanese and English translation. 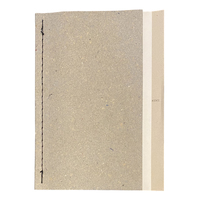