Published in conjunction with her first major solo exhibition at Tokyo Photographic Art Museum, the catalogue “To Be Bewitched By A Fox” comprehensively covers all of Japanese photographer Tomoko Sawada’s major works.

Since winning the Canon New Cosmos of Photography Award in 2000 with her college graduation project ID400, Sawada’s explorations of appearances, inner realities, and the complicated relationship between the two have earned her critical acclaim both in Japan and on the international stage. In her work, Sawada consistently uses her own self as the subject, adding a layer of self-portraiture to her unique form of expression.

Featuring images from Sawada’s main series – Reflection, Kageboshi, Bloom, Facial Signature, Sign, This is who I am, Decoration/Face, Masquerade, Recruit, glasses, cover/Face, ID400, untitled – the catalogue “To Be Bewitched By A Fox” provides readers with an encompassing introduction to her artistic vision. Essays by photography historian Madoka Yuki, visual communication professor Marco Bohr and TOP Museum curator Miyuki Endo then offer more context and background information. The book also includes a biographical information as well as a list of all of Sawada’s works.

“Sawada approaches her subject matter (herself) in ways that are rather comparable to the Bechers’ visual typology: an almost obsessive attention towards a singular subject matter with the effect of creating structure and order in an otherwise chaotic world.”
— from Marco Bohr’s essay “Tomoko Sawada and the Production of the ‘Self’” 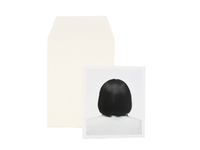