A sumptuous celebration of a Japanese cinema icon

Originally, “Yu-Kon, Ken Takakura (“Melancholic Soul”)” was published in 1971 but never reached a single bookshop due to the publisher going bankrupt, an injunction by a movie production company and other reasons.
This phantom of a book stayed hidden from the world for more than 30 years before it was finally published in 2009 – in its original form but profiting from the latest advances in printing technology.

The book also includes an interview with Ken Takakura as well as several essays relating to the making of the book (all texts only included in Japanese). 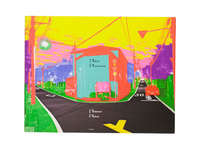