Born in Mianyang, Sichuan Province in 1973, Adou graduated from the Fine Arts Department of Sichuan Aba Normal College in 1995. After a career as a creative director in advertising for 9 years, he decided to quit and currently lives and works as a freelancer in Chengdu, Sichuan Province. Adou has won awards in photography competitions in China, the Netherlands, Japan and the United States, including the Three Shadows Photography Award (2009) and the Japan MIO International Young Photographers Competition for his series "Public Buses & Chinese People" (2005), and an Honorable Mention at the World’s 100 Young Photographers KLM Paul Huf Award (2007). Adou’s photographs have been shown throughout Asia, Europe and the United States, including two major solo exhibitions in New York and San Francisco (2009) and a Retrospective Exhibition in Kyoto (2007). His publications include "Samalada" (Zen Foto Gallery, 2013), "Adou and Samalada" (M97 Gallery, 2013) and "To Nietzsche" (Zen Foto Gallery, 2020). 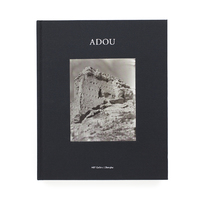