Morten Andersen was born in Norway in 1965 and started making fanzines and taking pictures of friends in punk rock bands in 1980, when 15 years old.

In the 80s he continued shooting for bands and norwegian music press, while also working in the darkroom at a daily newspaper in Oslo.

In 1990 Andersen moved to New York to study at the International Center of Photography.

His first solo exhibition was at Fotogalleriet in Oslo 1992, since then his work has been exhibited in solo and group shows in New Zealand, France, Germany, Greece, Russia, Italy, Austria, Holland, England, Sweden, USA, Norway, Portugal, Switzerland. 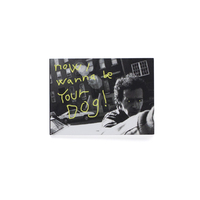 Signed Now I wanna be your dog