'Nerhol' is an artist duo created in 2007, composed of Yoshihisa Tanaka, who "kneads" ideas (kneader=Ner), and Ryuta Iida, who "sculpts" them(sculpt=Hol).The collaborative work between Tanaka and Iida, who come from backgrounds in graphic design and fine art respectively,is an effort to deepen the concepts behind their art, and an experiment in opening up new possibilities for artistic expression.
According to Tanaka, artwork 'linkage' and tactile together,lead to interaction, which is essential in visual language.
By reconstructing and transforming 2D art into 3D he encourages audiences to touch and explore new possibilities.
Iida 'deconstructs' existed material such as books and publications, stripping them of their initial identity as reading
material and pointing out the inherent value of such objects, including their visual properties.
Nerhol's anchoring point is to merge the two artists perspectives in order to aesthetically express artistic concerns. 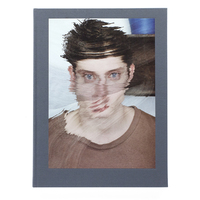