1946 Born in Shiga prefecture.
1966 Lived in Paris for one year, and met Shimaoka Tatsuzo who later became a Living National Treasure.
1968 Started to study under Geatan Beaudin, a Canadian potter. During this period,    came back to Japan twice and studied under Shimaoka Tatsuzo in Mashiko.
1975 Worked as a designer for a pottery company SIAL in Canada.
1978 Established a studio in Quebec, Canada.
1981 Returned to Japan and worked in Izu Peninsula in Shizuoka.
1984 Opened "Shop Taizo" at Shibuya PARCO. (～1987年)
1991 Built his residence and stuio in Futo, Izu Peninsula.
1992 Developed his distinctive white porcelain.
2001 Published the book “White Porcelain” in English.

Hold exhibitions in Museum and gallery all over the world. 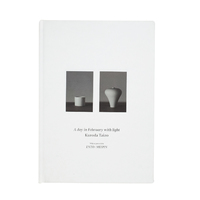 A day in February with light