“The term ‘trip’ seems to connote some far away place, but the trip may also be a small one to a nearby locale. Just an hour out of the city and you already see a difference in the aspect of the rows of houses. Ambling through these towns, you might come upon such houses evoking the Showa era, with white washed storehouses standing among them. There is a lonesomeness in seeing areas that once boomed with a local industry now in decline, with many a storefront shuttered in the shopping arcades and just a smattering of pedestrians even in broad daylight. Yet even from the stillness of the towns’ scenery, one can get a feel for the days when it thrived. I recall all those towns I passed through, walking to the north and to the south, relishing this reverie as I look upon the scenes captured on photograph.

With the convenience of today’s transportation systems, I get the urge to travel to some distant place whenever I find the time. Not to a tourist destination but to a town that imparts that nostalgic lived-in sensation. There are still may towns with such appeal, all over Japan, that I should like to capture and preserve.

This gaze, overlooking past to present, overlaps with reminiscences of that ‘distant day’, adding yet another page in my mind.”

Photographing areas such as Gyoda in Saitama to, Imabari located in Ehime prefecture, Hashimoto Katsuhiko’s A Distant Day looks as much into the future of the small townships and areas outside of Tokyo as it does looking back. Here, the images evoke the very sense of nostalgia which fascinates and intrigues any city-dweller when confronted with a space outside of the city limits. The surrounding landscape and it’s atmosphere exudes more than can be imagined from the closed up storefronts to traditional architecture of its houses, reminiscent of the Showa era of Japan. Katsuhiko’s gaze presents a wonderful photographic journey which overlaps and intertwines our collective memory and consciousness of all things relating to the past in relation to the present. 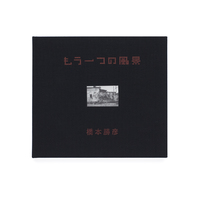