In their project “Atlas des Régions Naturelles” (ARN), Eric Tabuchi and Nelly Monnier attempt to document the 450 “natural regions” of France. They focus on the vernacular architecture and visual idiosyncrasies that constitute a place’s unique character: the roads, houses, shops, activities, typography and village names. Though the people themselves as well as the social and cultural specialties of each region are mostly absent in their pictures, Tabuchi’s and Monnier still manage to capture the spirit of a certain region and to draw out the differences between various areas. 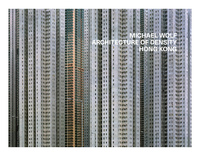