“Gen’ei – The Primeval Forest of Yakushima” features the last works of Japanese photographer Nobuo Arai before his death in April 2012.
At the end of his life, Arai gathered his last strength to travel to the island of Yakushima and photograph its virgin forests in his own, unique way.
After many complications and vicissitudes, Arai’s last series was finally published posthumously, more than eight years after his death.

“On December 9, 2012, I visited his home and operated on his favourite Mac computer as I sat in the chair of his study. (…)
His work was shot with an infrared effect, and the original data image was in red or pink. Using Photoshop, Mr Arai manipulated the tone curve in a way that only he could understand, and the monochrome inverted version of those data is used as the original, output with a printer that is compatible with the photo paper he had carefully chosen. His work is not something that can be easily imitated, and he is truly a photographer with passion and skill – to the extent that I feel it is inappropriate for me to call him a student.”
— from Masahiro Kawanobu’s afterword (included in Japanese and English translation) 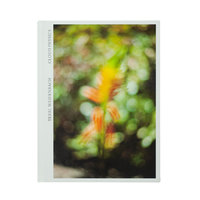