"KAMUY means God or bear in Ainu. MINTAR means outdoor land without any growing grass. KAMUR MINTAR can be translated as "the garden where Gods play and Ainu revered the holy mountains as enshrined place. Also, the word was used to name the place inhabited by many Brown Bears."

Born in 1949, Tamotsu Fujii is a well known photographer having established Tamotsu Fuji Photography in 1976 and winning numerous awards for his advertorial campaigns. KAMUY MINTAR is Fujii's sixth publication. Within, the images capture the windswept tids, slopes and planes of Japan's landscapes. From climbing the mountains within the northern regions of Japan to the rough coastlines, Fujii's KAMUY MINTAR depics a land, uninhabited by people, where nature and its forces are at constant battle and rest. 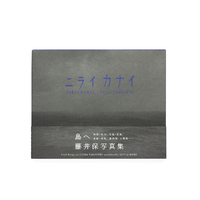