Following in-depth essays by Dieter Buchhart, Joachim Pissarro and Junya Yamamine on KAWS and the context and meaning of his work, the book traces the career of the exceptional visual artist over several hundred pages in photographs. Beginning with his earliest paintings and graffiti to the ad-busting and city-recontextualising works in the 2000s up until KAWS most recent large-scale installations and sculptural works, the reader is able to follow KAWS’ development as an artist of almost limitless range.

“In our collective visual memory, his COMPANION, CHUM or ACCOMPLICE, his KIMPSONS or KURFS evoke the Michelin Man, the Smurfs, the Simpsons, SpongeBob, Snoopy, Pinocchio, Darth Vader, or Mickey Mouse. But KAWS takes another step with his visual ideas by freeing them from the shackles of material. As Eugenie Tsai remarks: ‘KAWS has leveled some of the conventional hierarchies of the art world, democratizing and enlarging the possibilities of culture in ways that feel so right for this moment in the twenty-first century.’”
— from Dieter Buchhart’s essay

All texts included in Japanese and English. 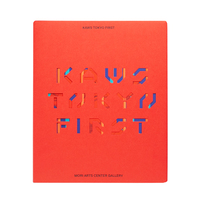