The intangible passing of time, captured in moments

Japanese photographer Shuhei Motoyama’s photobook “Nippon 2010–2020” is neither diary nor historical record of Japan’s past ten years. Similar to previous works like “Nippon 2003-2013,” Motoyama continued photographing as life kept going on, time continued passing, and the transient world spread further and further around him. His photographs – intricately framed, always keeping a careful distance to his subjects – appear as if taken along the way, as if in passing, yet over the course of the book’s pages a larger significance begins to make itself known.

“I am sure that in the years to come … I will keep on searching for an answer that does not exist, and once again I will start my new journey towards photography, a never-ending exploration.” — from Shuhei Motoyama’s afterword (included in Japanese & English translation) 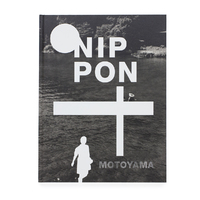