This book by Tomasz Gudzowaty, a photographer otherwise known for impeccably crafted black-and-white images, is a bold and unexpected attempt to embrace the aesthetics of chance, hidden in what he once considered a byproduct of his artistic process. Polaroid Type 55 film—which produced instant positive prints in addition to negatives—was a cult favorite of photographers using large-format cameras until 2008 when Polaroid announced it would cease production of all instant film. Imperfect, over- or underexposed, scratched and sometimes barely legible, the positive prints were usually discarded or kept as rough proofs to aid the selection of negatives to print. Here, they stand as works of art all their own.

The practice of examining the instant contact sheets right after shooting a photo made me extra sensitive to the hidden potential of yet undeveloped images. And I also realized that imperfection is an essential part of photography, a price for faithfulness to the nature of the medium, which is, in a sense, a haphazard interpretation of a moment. The contact proofs are literally proof of that. 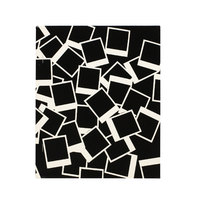