“‘And I Reminisce’ might be an exploration of Axelvall’s past but it is not a search for an idyllic past that inaccurately occurred; Axelvall is seeking clues and junctions that would have altered his present if acknowledged or acted upon earlier.”
— from the publisher’s statement

Jörgen Axelvall’s photobook “And I Reminisce” (published four years after “Go to Become”) is formulated as a visual recollection; intimate, vulnerable, sensual and pensive. In portraits and nudes of friends and photographs of flowers, Tokyo-based Axelvall reflects upon experiences made during his time in New York – including a life-changing discovery – and memories from his childhood in Sweden. Axelvall, poetic in images as well as words, lends his photographs further depth through a short narrative text.

“Sheer experience between the presence of each participant, basking in space shared. This applies not only to the photos of people but also flowers… This is photography as a gesture—embracing someone or something’s sheer presence. Despite being merely together, but perhaps reconsidered as being sheerly together. I feel hope from his photography.”
— from Yuki Harada’s text “Hope of Sheer Pressure”

The book includes a pamphlet with additional texts by Paul McInnes and Yuki Harada. All texts in Japanese and English. 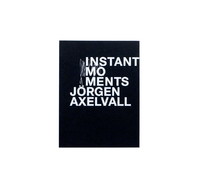