“Through the act of tattooing, I visualize two distinct personalities: the body and the spirit.”

With “Bunshin,” Japanese calligrapher and tattoo artist Shinsuke Kiryu presents a photographic documentation of his art and contemplates the deeper relationship between signs, symbols, tattoos and their wearers. Kiryu’s customers apply through the internet; based on their desires, prayers, wishes and hopes, Kiryu then condenses their words into a single calligraphic character.
“The single character connects body and soul and is an earnest inquiry into one’s own existence.”

Tattoos have different meanings depending on one’s religion and culture. In Japan, tattoos have both a negative context due to their history as a method of punishment and a general association with crime, but also exist in positive contexts such as sanctification and wish-fulfilment. There are deep gaps in consciousness and meaning between the person creating a tattoo and the person who wears it. By dealing with the gaps between the two, Kiryu’s photobook explores not only the art of tattoos themselves but also the nature of human perspective and perception.

Please note that all texts are available in Japanese only. 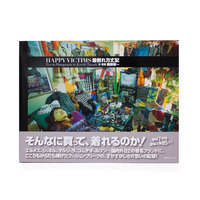 Reach out and Touch Faith