Having learned under, among others, Daido Moriyama in the 1980s, Hiroyoshi Yamazaki spent the 1990s photographing the streets of Tokyo. Caring for his bedridden father at home, Yamazaki used his time outside to capture streetlife in Tokyo in images that each tell little tales and—put together in the book “Crossroads”—form a greater story of life and fashion in the years immediately after Japan’s Bubble had burst. There is, of course, always a historic value to photographs like these, but Yamazaki’s images transcend the status of mere records; there is a lightness to his framings, and a strange, intriguing distance to the scenes not found in other street photographs (of any era).

“It was not from a particular consciousness or awareness that I chose to take snapshots of Tokyo. It’s just a wander down the classic highway of snapshot photography. More than the active pursuit of capturing the shot, today I feel that the true essence of photography is found in what enters into and winds up in the photographs.”
― from Hiroyoshi Yamazaki’s afterword 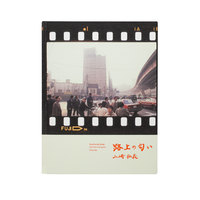 Signed Smell on the Street