“Early Works” presents Chinese photographer Han Lei’s black and white photography from the 1980s and ‘90s.
Han Lei began taking documentary-style photographs in the 80s, focusing on everyday life and street scenes in and around his hometown of Kaifeng. The photographs in the photobook astonish in several ways. First, there’s Han Lei’s mastery as a photographer: his work preserves a bygone China, and it does so with such clarity and simplicity that they elicit a strange sense of nostalgia. Further, Han Lei possesses a gift for the “decisive moment,” for framing single shots that manage to reveal a larger truth or tell fragments of a greater story. Han Lei’s photographs capture China in a period of change:

“The figures, faces, and environments he photographed indicate the cracks in collectivism. People had lost traditional cultural roots, but they were also full of longing for, confusion about, and misunderstandings of modernity; a stifling blindness that had persisted unchanged for several thousand years and Han’s dynamic capturing of this blindness seemed to prefigure the massive price that would later be paid for urbanization and commercialization: the deformed tackiness that dominates the entire face of reality.”
(from Zhu Zhu’s foreword) 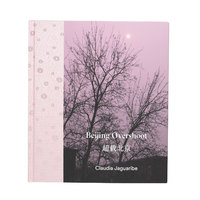