Faced with the imminent death of his father, Li Lang photographed his father in a strikingly plain, almost clinical style. Frontal portrait, profile shot, torso from the front, torso from behind; dentures placed before a white background. A heap of hair – the last hair off his father’s head. Personal belongings: a necktie, a hat, a watch; a giant three-page foldout of the father’s couch. Finally: handprints, footprints, and then dust (or rather, clay collected from the father’s hometown).
Li Lang’s series – an attempt to fight against the meaningless hyphen – is as fascinating as it is touching.

“I would say the life father had led was very ordinarily. He was a person who could be neglected entirely in the world. His death was as normal as any other, one which people would forget soon. Nevertheless, I have been attempting to resist this sort of oblivion in my own way for a long time, fighting against the flow of time that weakens my memories and love.”
— from the artist’s statement 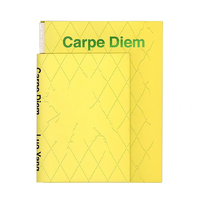