Mari Katayama’s photobook “Mother River Homing” brings together a trilogy by the artist, featuring the 2016 series “Shadow Puppet”, “Bystander”, and “On the way home”.

Katayama, who lost both of her legs at age 9, has spent her life relying on prosthetic limbs. Her body features prominently in her photographic work as Katayama uses self-portraiture, a certain sense of humor and intricate visual orchestration to question ideals of beauty, health and womanhood, explore less tangible subjects such as the relation between mind and body, and to realize creative sceneries and images borne out of her personal experience. These include – in the series “Bystander” – photographs of Katayama lying at a beach attached to a number of self-made legs, almost like a figure from ancient mythologies. In other photographs, a pair of oversized cushion legs becomes part of family photographs, as if their significance takes on a presence of its own.

“The human body keeps changing, and unable to maintain its condition, it disappears completely while memory fades. Creating objects initially was for me a way of verifying my own, and I believed that those truths that we call memories were things that sometimes slip away from our bodies. A photograph, however, is something that one can keep.”
― from Mari Katayama’s afterword (included in Japanese and in English translation) 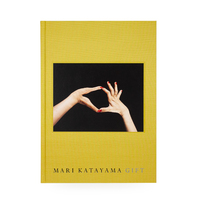