“It goes without saying that the most striking difference between the Pacific coastline of Fukushima and other areas is the high concentration of radioactive material that has diffused and accumulated there. The boundaries and ranges of the ‘difficult-to-return zone’, the ‘restricted residential area’, and the ‘zone in preparation for lifting of the evacuation order’ marked off for convenience by the country can easily be indicated on an ordinary map. […]

One of the things have tried to do in Natural History is to line up on the flat surface of the photograph the Now of the areas isolated from the outside world due to diffusing of radioactive material and the Now of areas regarded to be outside these zones.

By placing side by side photographs of places that have continued to be in the extremely abnormal condition of having an accumulation of radioactive materials and photographs of the places we live that are thought to be far from those places, is it possible to manifest the differences and homogeneity or equivalency of those areas and the invisibility hidden there? With photographs, we can inquire into the possibility of connections of the places where we live with places such as Hiroshima, Nagasaki, Auschwitz and Birkenau that became notorious for the horrendous happenings brought about in the past during World War II and in addition laces where terrible things are currently in progress on earth?

Usually the photographer arrives late to the event. Being late also means that the photographer knows the event that has already happened. We all know about the events that happened in Fukushima (and in Hiroshima and in Nagasaki, and Auschwitz), although what we know may only be a little or even be wrong. But at the same time, it is hard to say that we know exactly what is happening in those places now. What can be done so that it becomes possible to take photographs of what we don’t know is happening?”
— from Keiji Tsuyuguchi’s introduction 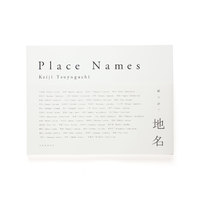