"Until the age of fifteen, I grew up in Shimada city in Shizuoka prefecture where I was born in 1946. My first encounter with irezumi (Japanese tattooing) was around eleven years old at a public bath, where I saw a man with full body inking. The work covered him from his wrists to his ankles in black and indigo shaded patterns, and on his back there was a large carp climbing a waterfall ( a classical irezumi motif). Even now the memory is clear in every detail and has carved a powerful impression on my mind, and at the same time possesses me with a strange attraction to tattoos that words fail to describe."

-Horiyoshi III (Nakano Yoshihito), excerpt from Reflections on my life as an Irezumi tattooist, RANSHO

Published by Shogakuka in 2015, RANSHO - The world of Horiyoshi III marks photographer Masato Sudo's fifth publication within the photographic body of work which depicts the Japanese traditional tattoo culture of Irezumi. Masato Sudo's publication captures the work of legendary irezumi tattooist Horiyoshi III (Nakano Yoshihito). Collaborating with Horiyoshi III, Sudo photographed the tattooist's clients in an array of portraits which celebrate both the traditional designs of the tattoos and the Japanese landscape. Shooting in and amongst nature; from water, waves, bamboos and sand, Sudo's photographs capture and celebrate the traditions of the practice in a contemporary approach. 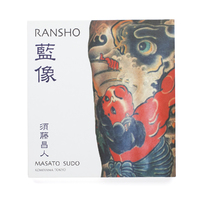