In spring, at the age of 21, I met the artist Sakamoto "Horijin" Goro, and with the artist's help and the support of the artist's Shakai Club, I held my first "Ransho" photo exhibition in April 1981 - the name of which was chosen by Sakimoto Goto.

After that, the pioneering tattoo artist Mitsuaki "Horikin" Owada, known for revolutionizing developments in tattooing techniques as well as introducing the Japanese art of irezumi to the world, and Owada's Japanese Tattoo Club, assisted in holiding the second "Ransho" photo exhibition, with the additional cooperation of Yoshihito "Horiyoshi III" Nakano - perhaps the most famous tattoo artist in the irezumi world and renowed for his innovative and daring designs - and the support of Nakano's Yokohama Tattoo Frienship Association. Following that, with the help and cooperation of many tattoo artists and models, the first edition of my photo book "Ransho" was published in April, 1985.

For this new edition, in addition to the later photos taken of the model "Venus" with an 8x10 camera, images of "Number-human letters" formed by 12 models with full-body tattoos have been added to the book for a fresh and modern feel. We would ilke to thank Komiyama Tokyo for breathing new life into this work and we are deeply grateful for their support.

This book is dedicated to the people of Ransho who are longer in this world, but continue to shine in the next with their exquisite and beautiful tattoos.

To hold in deep respect the culture of the common people passed down from old, Choosing each pattern with painstaking care.

In the midst of a silent space and moment, The hands of a single minded master
Engrave onto the bodies of the brave

The spirit concealed withing and the beauty released outward, When these have become one,

The aesthetic of the naked body hidden from sight, The pride of Japan, is born in the world.

To those who have gained the ability to shine continuously,
I call, Ransho.

All text available in both Japanese and English. 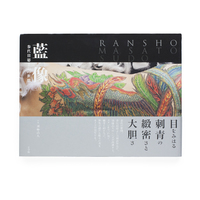 RANSHO - The world of Horiyoshi Ⅲ