It was from 1970 to 1985 when I intensively photographed Tokyo. Japan was radically changing as rapid economical growth was underway. Old houses and buildings were being destroyed and replaced by new ones including modern skyscrapers. Even today, Tokyo is still expanding.

I thought it would be quite interesting if I shot Tokyo using the technique of time-lapse photography. I fixed a full-automatic camera on the top of the Tokyo Tower, turning it to various directions such as Shinjuku and Ginza and releasing the shutter once every hour every day for ten years. Back then, filming cameras could shoot 24 frames a second. There are 24 hours in a day so I could shoot a one-second short movie with 24 frames every day. Therefore the movie would add up to 30 seconds in a month and about one hour in ten years. It would depict the rapid development of Tokyo in super-slow speed, revealing the real essence of Tokyo as an ever-moving huge life form like a protozoan–––I expected so.

The image of Tokyo as a "huge life form" did not come from literary imagination. It was based on what I sensed physically during my walking around Tokyo in those days.

In Tokyo, there are layers of sediment from diverse times. Tokyo today. Tokyo in the time of the post-war black-markets. Tokyo in the Edo period. A day of the people in Tokyo commonly begins with getting up in the morning and going to work. When the day's work is done, they go home after stopping by shopping streets or drinking bars.
Nowadays, I see crowds of people flooding all over the Tokyo city area from morning to night. The crowds are always there, from the first train to the last train of the Yamanote Line, the Chuo Line, subways and various private railways. However, when the last trains are gone, along with the businessmen and women, students, and the workers of restaurants and bars, Tokyo is deserted, and the "other face of Tokyo" emerges.

Somebody gathers food dumped by bars and restaurants. Another one picks up cardboard boxes and cans that may sell. There are people sleeping on the street. Some of them are drinking alcohol. Homeless people begin to act lively. Exactly, Tokyo as a "huge life form" reveals itself.

Rare, Second-hand The Tales of Tono 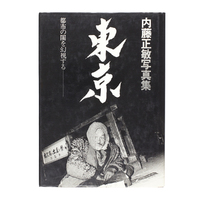 TOKYO : A VISION OF ITS OTHER SIDE