The images in Tones of Dirt and Bone were made between 2004 and 2006, with a Polaroid camera and Time Zero film. Brodie used the characteristics and limitations inherent to this type of camera and film to his advantage. The portraits he made are further enhanced by the peculiar color palette of the film. Due to the restriction of manual focus and expensive film, that came only ten sheets to a box, each image feels deliberate and precious. 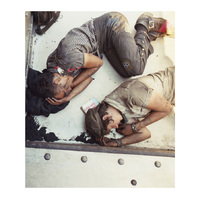 A PERIOD OF JUVENILE PROSPERITY