The photographs in New Cosmos of Photography Grand Prize winner Ikuro Suzuki’s new photobook “Tsukiyo” were taken following the Greast East Japan Earthquake in March 2011, in Suzuki’s hometown of Hamamatsu and in Tokyo. The low-contrast black and white photos show his family, friends, people he encountered (often only once), food and views he happened upon. While it contains elements from both, “Tsukiyo” feels neither like a portrait collection nor like a diary.

“I quite often wondered why the photographer took some of these photos. Anyone can take nice photos, beautiful photos, cool photos. But it’s hard to take photos that make viewers wonder why they were taken.” (from Masahiko Kishi’s essay “Never meeting again after never meeting at all”) 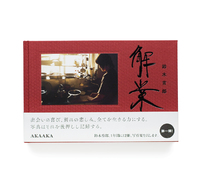