“Cairn” is a photographic record of a month that photographer Shigeta Kobayashi spent on his own in Iceland, camping out in the wild, traveling on foot, taking photographs intuitively. As time passed and the midnight sun turned nights to days, Kobayashi began to contemplate his own individuality and his place in relation to the world. At the same time, he felt other boundaries melt away. A poetic visual document about thinking life over.

“From the streets of a strange town to the mountain roads that were misty with fog, I continued to walk without a clear destination. The white night threw off my sense of time, and the unfamiliar encampment blurred the boundaries between the inside and the outside. Even the path shown by the GPS made me suspicious at times. And before I knew it, my finger had already pressed the shutter.”
— from the artist’s afterword (included in Japanese and English translation) 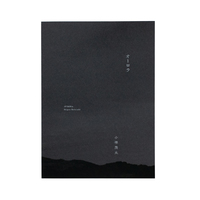