"From the teeming mass of humanity that is Shinjuku-ku to the tranquility of Mount Koya, Japan has always been a place of dichotomies for the Westerner. Not far from pulsating lights, booming music, and bullet trains one can find ancient cedar trees growing straight up to the heavens. I am fascinated by the technological wonderland that is Tokyo, entranced by the delicate food of Osaka, amazed by the elegance of Kyoto, silenced by the peace of Hagi, and struck by the volcanic black sand beaches of Kagoshima. Japanese culture draws me in, embraces me, and won't let me go. As a foreigner, I realize that I hardly know and barely begin to understand this culture. But whenever I visit Japan, I marvel at what I encounter."

Born in Ohio, U.S.A Tom Finke's Japan: Footprints in Time 1997-2010 is a publication which presents a wonderful visual comparative to his recently published America: Footprints in Time 1982-2012. Within, Finke's images portay a narrative which separates itself from a subjective gaze. Here, the photographs subtlely comment upon the landscapes and people of which fill Finke's images, reflecting a perspective which is acutely aware of the cultural differences between photographer and subject, yet simultaneously conscious of a sense of similarity that lies within a deeper connection.

Included within is an afterword by Tom Finke.

Text avaiable in both Japanese and English. 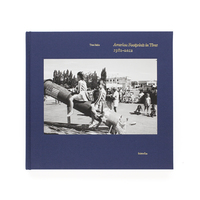