The setting for “Wounded Bears” is the climax of the Dosojin fire festival, which celebrates ancestral folk deities known for warding off evil spirits. These gods, called “Dosojin”, are the guardians of the roads and borders surrounding rural mountain towns. This annual festival is known as one of Japan’s three great fire festivals, and was designated an Important Intangible Folk Cultural Asset in 1993. It is performed in stages before an increasing number of spectators between the 13th and 15th of January in Nozawa Onsen village in Nagano.

The work itself consists of images of the dramatic attempts by male residents of the village to set a huge wooden shrine ablaze with traditional torches. The main shrine itself is prepared specifically for the festival using wood from a select group of sacred Japanese beech trees which are harvested at the same time every year. Men who are the “unlucky age” of 25 bear the duty of protecting the shrine from assault by guarding its base. These valiant young defenders - the primary subjects of Kai’s lens - risk their safety in an intense interplay of offense and defense for approximately an hour and a half. The resulting images are scenes of struggle.

— excerpt from the afterword (by Hitoshi Suzuki) 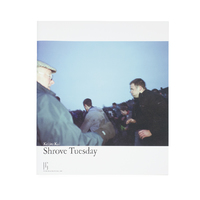