The photobook Rainbow Variations by Japan-based Artbeat Publishers is the first anthology of Taisuke Koyama’s experimental photography, including his ‘Rainbow Variations’s series, on which he has been working since 2009, and his latest series ‘Pico’.
The epynomous ‘Rainbow Variations’ series sees Koyama photograph extreme close-ups of rainbow-coloured publicity posters in an experiment to transform and iteratively amplify the photographic images of a "rainbow as an artefact”. 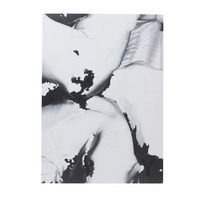