In 1982, then 25 years old, Nancy Floyd decided to begin photographing herself every day. The photobook “Weathering Time” (Floyd’s debut photobook!) contains more than 1200 photographs of the over 2500 pictures in total.
Organized into categories such as “Smiths,” “Mom,” “Jane B” or “Shirts with Words” and “Good hair,” Floyd’s formalistic series follows the passage of time, records changes in fashion and lifestyles and technology, and offers a (positive rather than negative, optimistic rather than pessimistic) meditation on time, aging, and loss.

“The resulting visual calendar now consists of more than 2500 photographs. More often I’m by myself in these images, but sometimes I’m with family and friends. As time passes, births, deaths, celebrations, and bad days happen. Pets come and go, fashions and hairstyles evolve, typewriters, analogue clocks, and telephones with cords disappear; film gives way to digital and the computer replaces the darkroom.
While ‘Weathering Time’ chronicles my youth to the dawn of my old age, the images also reflect the experiences of my generation and underscore the cultural, technological, and physical changes that have occurred over the past thirty-nine years.”
― from Nancy Floyd’s afterword 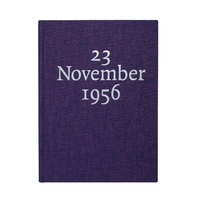