FUKUSHIMA MON AMOUR is an artist book. The title paraphrases Marguerite Duras'
"Hiroshima mon amour", and thereby indirectly evokes associations with the great Japanese trauma of the nuclear bombing in 1945.
Watercolors of fragments of toys, which seem to originate from surprise-eggs, or which could have been assembled from a walk at the beach, are juxtaposed with photographs. The photographs have been assembled in an internet research with the search terms "Fukushima" and "tsunami". Nevertheless the images circle around the catastrophe rather subtly. Absurd advertisement messages such as "Nuclear power is a bright future energy" are in contrast with (formally beautiful) genetically modified peaches.
Like in Kawabe s preceding book "Nostalgic hentai", the painted motives are executed in sensitive and meticulous manner, while in their relationship with the found images - despite formal resemblances - leaving several questions open. 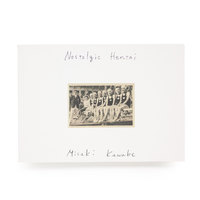