The motif of the included print is the final image in the picture gallery.

“Tsugaru: The Tale of Tsugaru by Ryoji-sensei” – Ryoji Akiyama’s first photobook newly re-issued for the first time in 42 years

Ryoiji Akiyama was one of the most important post-war photographers in Japan, and “Tsugaru: The Tale of Tsugaru by Ryoji-sensei” – his first photobook publication from 1978 – belongs to his early masterpieces. Akiyama had decided to leave Tokyo for a while began work on a new series with a unique idea. He would take on the role of a fictitious “bureau chief” and move to a provincial city from which he would report back. Having chosen Hirosaki City in Aomori Prefecture as the location for his bureau, Akiyama lightheartedly and humorously documented the daily life and culture in the Tsugaru region and the people he encountered in photographs.

All captions are available in Japanese and English translation; the closing essay is included in Japanese only. 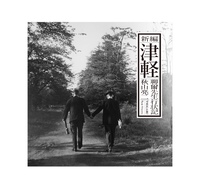 Tsugaru: Tale of Tsugaru by Ryoji-sensei